How are heavyweights like Amazon, Ford, and Samsung tackling innovation? How are they implementing strategies to foster a spirit of ideation to generate new ideas, while also spearheading initiatives to overcome target challenges? In this article, we’ll explore five inspiring examples of innovation in business (both disruptive and incremental), and what lessons they offer concerning survival on today’s uncertain corporate landscape.

Amazon: Harmonizing Disruptive and Incremental Disruption With the Element of Speed

It would be naive to suggest that there’s only one definitive example of innovation from retail titan Amazon that enterprizes could benefit from emulating. However, the development of Amazon Custom offers a particularly insightful open innovation example that has reaped the benefits of both incremental and disruptive methodologies. As the name suggests, this bold new initiative allows vendors, for the first time, to sell products via Amazon that could be customized (i.e custom text, personalization, etc).

Adapting agile principles, Amazon launched the Beta version of Amazon Custom in a short time frame, allowing existing customers to provide feedback directly. This, in turn, allowed Amazon to refine their disruptive new product incrementally and continuously. Most importantly, it enabled the company to retain the element of speed which, according to a notable report by BCG 1, can lead to lower development costs, greater forecasting accuracy, and the chance to secure a greater market share. Amazon was able to secure the edge in speed because their new initiative could be developed on the fly, eliminating the need for excessive incubation and pre-launch research. 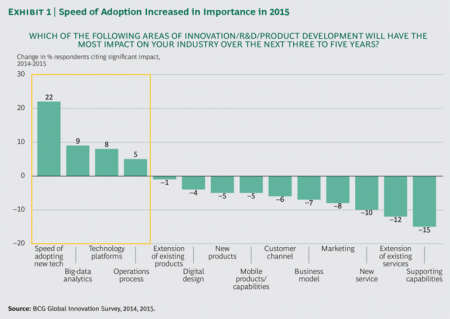 A report from BCG highlighting the critical importance of development times for securing innovation ROI.

Amazon epitomizes how allowing a disruptive idea to be honed and improved incrementally via open innovation can yield substantial returns.

Surviving on the rapidly shifting business landscape can at times require fundamentally altering your business trajectory, regardless of how well-entrenched and successful it has been. Philip Morris International (PMI) presents a prime example of this. Despite being the world’s largest tobacco company, PMI is investing billions in creating a smoke-free future – initiating one of the leading “self-disruption” strategies in modern business. Already, the company has launched more than 3,400 patents 2 for new technology that will potentially provide healthier alternatives to cigarettes.

In order to power their transformational strategy, and generate new ideas for tobacco-free products, PMI has harnessed the power of crowdsourcing. By implementing Qmarkets innovation management software, PMI has engaged more than 65,000 employees worldwide. The software enables employees to submit their ideas for customer-centric innovation that align with the company’s new ‘self-disruptive’ ethos. By giving employees from multiple departments and backgrounds a means to contribute suggestions, as well as assess and develop them, PMI is able to smooth its transition to a whole new paradigm. Check out this fascinating webinar to learn how PMI has managed this‘self-disrupting’ transformation initiative.

Samsung: Harnessing the Power of the Creative Elite

As one of the world’s leading technology companies, Samsung is widely recognised as one of the most innovative conglomerates on earth and are a great open innovation example. Their innovation management strategy entails deploying an experienced ‘creative elite’ to take the lead with new projects, ensuring they are primed to incorporate the best-practices and yield maximum KPI.

To achieve their objectives, Samsung’s creative elite make use of open innovation software and corporate tech scouting approaches. For example, when new products are released, Samsung utilizes customer feedback to inform their TRIZ problem solving methodology 3 –  which examines contradictions in customer’s expressed desires and technological capabilities to establish a clear picture of where innovation efforts should be focused. Once the clearer picture is gained, Samsung then approaches relevant scientific, technological, or corporate bodies that can deliver the expertise and resources needed to make the innovation project happen.

An example of this two-fold approach in action is Samsung’s strategic partnership with the Russian Academy of Science 4. After using the TRIZ method to pinpoint gaps in the market where lucrative innovation efforts could be made, Samsung’s creative elite worked with members of the Academy to help develop an array of products, ranging from new LED bulbs to 3D mapping technology.

Click here to discover how
employee innovation can
transform your business

As the world’s largest food and beverage company, Nestlé offers some particularly outstanding examples of innovation in business. With a presence in 189 countries worldwide, and employing 339,000 staff, Nestlé has invested heavily in innovation campaigns geared towards overcoming logistical barriers and anticipating disruption from competitive startups.

Nestlé has adopted a two-pronged approach to drive growth via internal and external innovation. In 2014, the industry giant used Qmarkets innovation software solutions to launch the ‘InGenius’ global innovation accelerator – designed to enable Nestlé employees to collaborate and provide solutions for business challenges, without being hindered by geographical or language barriers. A wide variety of disruptive ideas submitted to the platform have already been implemented as company initiatives, ranging from the use of drones and new apps to streamline inventory tracking, to projects designed to improve irrigation in developing countries.

To harness the potential of open innovation, as well as the creativity and flexibility of startups, Nestlé launched its Henri@Nestle project in 2016. Also powered by Qmarkets software, this collaborative project incentivises agile and creative start-up companies to pitch idea proposals to Nestlé. These startups are given the chance to earn stakeholder sponsorship and funding towards bringing their vision to life. 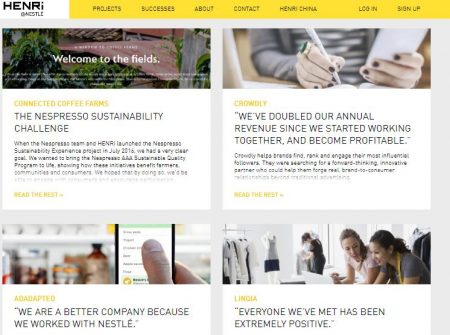 The HENRi@Nestlé project is one of the most notable innovation examples geared towards startup collaboration.

This external innovation strategy reflects a growing trend, with more than 67% of the largest companies in Europe seeking out early-stage start-up interactions.

The rise in digital technologies and increased urbanization is set to fundamentally change the roadways of the future. Silicon Valley, along with a variety of auto tech startups, have begun to intensify their focus on achieving disruptive change in the sector. These factors have played a key role in shaping innovation efforts at Ford Motor Company, which is making use of crowdsourcing methods to foster ideation on multiple fronts.

To engage employees to contribute suggestions and tackle a variety of innovation projects efficiently, Ford uses its IdeaSpace innovation accelerator. Powered by Qmarkets innovation management software, ‘Idea Space’ allows innovation challenges to be set to involve a select group of participants (such as a department) or the company as a whole.

A notable innovation project Ford is currently working on is the Intersection Priority Management System (IPMS). Utilizing hybrid wireless connections, the IPMS is designed to enable vehicles on the road to share trajectory data so they can move through intersections safely without having to stop.

What Can Be Learned from These Examples of Innovation in Business?

While it’s important to learn from the best, there is no one-size-fits-all method when it comes to innovation. Companies will need to formulate their own innovation strategies to target specific objectives, incorporating large scale, and often complex workflows and incentivising internal and external stakeholders to participate. However, by utilizing idea management software, a diverse range of innovation strategies – such as the ones explored above – can be implemented for maximum impact.

To discover how Qmarkets can help you implement the winning innovation strategies employed by these major companies, or arrange a free demo, don’t hesitate to contact us today.

Process Improvement and Sustainability Principles at Ford, ESB, and Solvay