A New Way of Thinking About the Automotive Industry

Over the last couple of decades, Silicon Valley has been responsible for inventing and reinventing all kinds of gadgets and technologies: the music player, the phone, the watch, the TV and the computer itself. Recent trends suggest that the automotive industry might be next on Silicon Valley’s disruption list.

Besides a surge of auto tech startups and Tesla’s success, Silicon Valley’s new focus on generating innovative Ideas in automobile industry projects is heightened by chatter about a secret car project by the most prominent disruptor of them all: Apple. Dan Akerson, retired CEO of General Motors, recently commented on Apple’s alleged entrance into the automotive market with the following remarks:

“We take steel, raw steel, and turn it into a car. They have no idea what they’re getting into if they get into that.”

But is this really true? Does Silicon Valley really have no idea what they are getting into? Or might the Valley just have a drastically different idea of the future of the automotive industry? 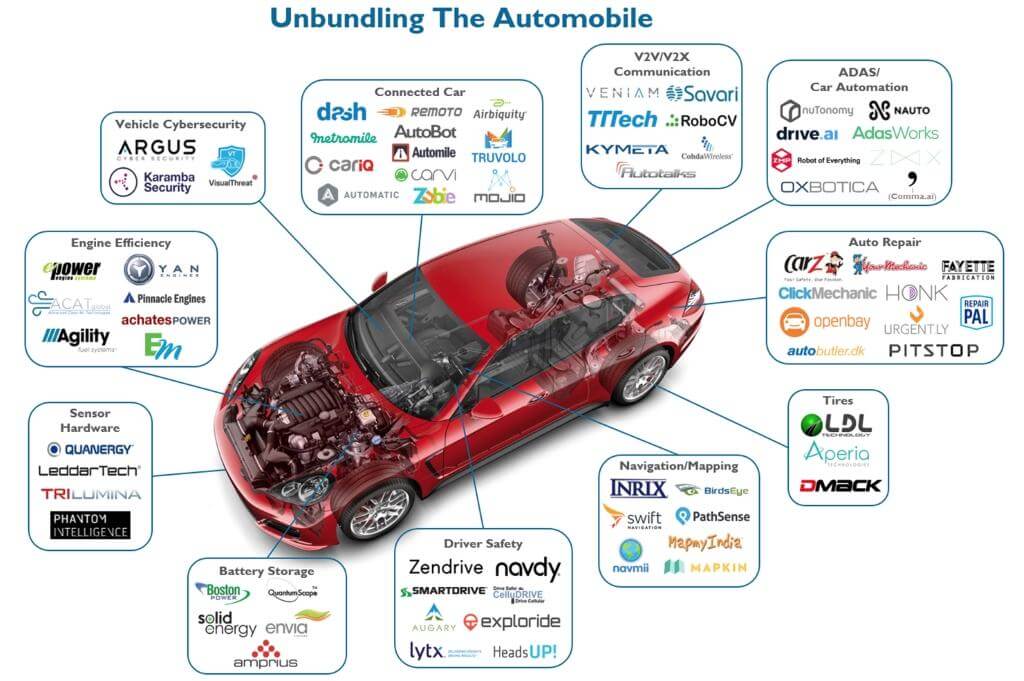 Innovative ideas in automobile industry projects originate from myriad companies. This diagram gives some idea of the number of companies whose products come together within a single vehicle.

Are We Reaching Peak Driving?

One reason for Silicon Valley’s interest in the automotive industry is the theory of “peak driving”. In the U.S. and Europe, people are buying fewer cars, driving less and getting less driver’s licenses, suggesting a major cultural shift away from individual car ownership. This is especially true when one looks at the behavior of 16-30-year-olds living in urban areas.

While car sales in other markets, such as China, are still growing, a look at cities, here too, signals that this trend won’t hold for long. For example, in Beijing, a driver wishing to purchase a vehicle with an internal-combustion engine must first enter a lottery and then wait up to 2 years before receiving a license plate.

Consulting firm McKinsey expects such vehicle use restrictions to grow even more stringent in emerging countries as the level of urbanization and air pollution increases. Globally air pollution already accounts for 6.5 million deaths annually. It is such developments, among others, that attract Silicon Valley disruptors to enter and redefine the industry.

Changing the Worldview About Cars

The purpose-driven Silicon Valley entrepreneurs and executives, following their “change-the-world-mantra”, are viewing the shortcomings of internal combustion engine cars as global challenges, solvable by innovative technologies and business models.

In their view, cars are an old, inconvenient technology, destroying lives, polluting the air, and contributing to global warming. For executives like Eric Schmidt, chairman of Google’s parent company Alphabet, the argument for disrupting the automotive industry is obvious. Referring to the over 1 million deaths and 15 million injuries caused by car accidents globally each year, Schmidt speaking to shareholders in 2016 bemoaned: “How could you accept that? Why is this not a national crisis?”

Furthermore, from the perspective of Silicon Valley, cars are not only destroying lives and the environment, they are also extremely narrow “computers on wheels“. While cars have become increasingly more computerized, they are still relatively unintelligent, inefficient, and rarely connected to the Internet with no unifying platform that allows third party software to be run. This is where Silicon Valley steps in: The smarter the car gets, the more it becomes obvious that the automobile is but one element of a complex mobility system – a system due for digital disruption.

The individual components which come together to form a car are obviously not all made by the same supplier, in fact there are thousands of satellite companies withint the automotive industry which support manufacturers at various stages in the supply chain. These smaller companies are often responsible for the innovations which have huge impact to the industry as a whole:

✔ Windows – innovations in this department can lead to aesthetic design innovation

✔ Seatbelts & airbags – innovation with regard to safety features of any car is essential, and new methods are constantly under development

✔ Lighting – Whether it’s innovation in luxury class vehicles with the intention to impress, or functionality-focused for headlights and break lights

See Why Innovation Management
Is Critical for the Transport
and Logistics Sector.

From Selling Cars to Selling Experiences

A recently published report by independent think tank RethinkX suggests that by 2030, 95% of U.S. passenger miles traveled will be served by on-demand autonomous electric vehicles, owned by fleets, not individuals. In such a future, the key customer question that the automotive industry has to answer with innovative products and services is not: “What car should I buy?”, but rather “How do I get from A to B?”. 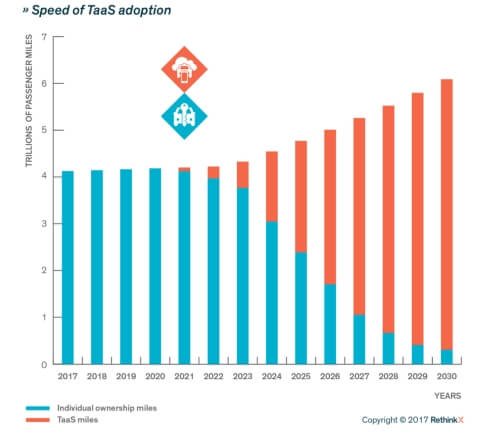 This dramatic shift from individual car ownership to Transport as a Service (TaaS) is the vision followed by Silicon Valley. Tech companies are racing to deploy the first TaaS solutions to leapfrog traditional car manufacturers and to gain first-mover advantages. Not only would such a shift dramatically shrink the automotive market (unit sales and margins), it would also mean that platform providers, companies developing autonomous vehicle operating systems, and computing platforms would win over traditional car manufacturers. Furthermore, as one billion people get in and out of cars every single day, McKinsey forecasts that aggregating and selling data from these vehicles could grow into a $450 to 750 billion market by 2030.

So, while executives of the automotive industry were still laughing at Google when it unveiled its fleet of little pod-cars without steering wheels in 2014, some traditional car manufacturers like General Motors have now at least begun calling themselves mobility companies instead of car manufacturers.

In this coming mobility revolution, the predominant challenge for traditional players in the automotive industry is self-disruption. These companies have to redefine who they are and what they stand for. Changing the worldview about cars is the best way to start. As Vijay Govindarajan, a world leading expert on innovation and New York Times bestselling author, explains in his book The Three Box Solution: In order to create the future, one must forget the past. Govindarajan explains how older organizations often fall into the complacency and legacy trap, i.e. focusing too much on their past successes and existing structures and cultures. He argues that organizations must establish formal regimes of planned opportunism (i.e. gathering and analyzing weak signals and trends) and thus challenge their internal beliefs and values.

This means that incumbent players in the automotive industry are well advised to continuously irritate themselves and to create a new understanding and vision of the future of their industry. This requires open innovation solutions in order for employees and other stakeholders to first and foremost develop a collective intelligence about disruptive trends, but also to express new ideas that challenge the status quo.

Some of the biggest automotive companies are now taking notice and beginning to utilize this methodology. For example, in 2016 Ford began working with award-winning innovation management software vendor, Qmarkets, to engage their workforce and overcome their business challenges. Idea & Innovation Management software can help organizations shift their perspectives and jumpstart a conversation about new business opportunities which could prove invaluable to the success of the organization.

Due to the fast-paced nature of the automotive industry, as well as the emergence of new technologies and environmental regulations, innovation is an imperative. According to a recent Bain & Company article, “To maintain a leadership position in the automotive market and survive for the long haul, companies will have to virtually reinvent themselves—and quickly.”

At Qmarkets, we’ve helped major multinational transportation an automotive companies — including Ford, Renault, and Hyundai —optimize their innovation initiatives. By implementing our innovation management platform, these companies have engaged their employees, incentivized them to submit ideas to reach certain company targets, as well as encouraged them to develop creative new ways to improve sustainability practices. In addition to offering a way to foster an ideation culture, the platform also serves as an idea ‘assembly line’, where senior staff can develop and hone idea submissions so they can be implemented to achieve maximum ROI.