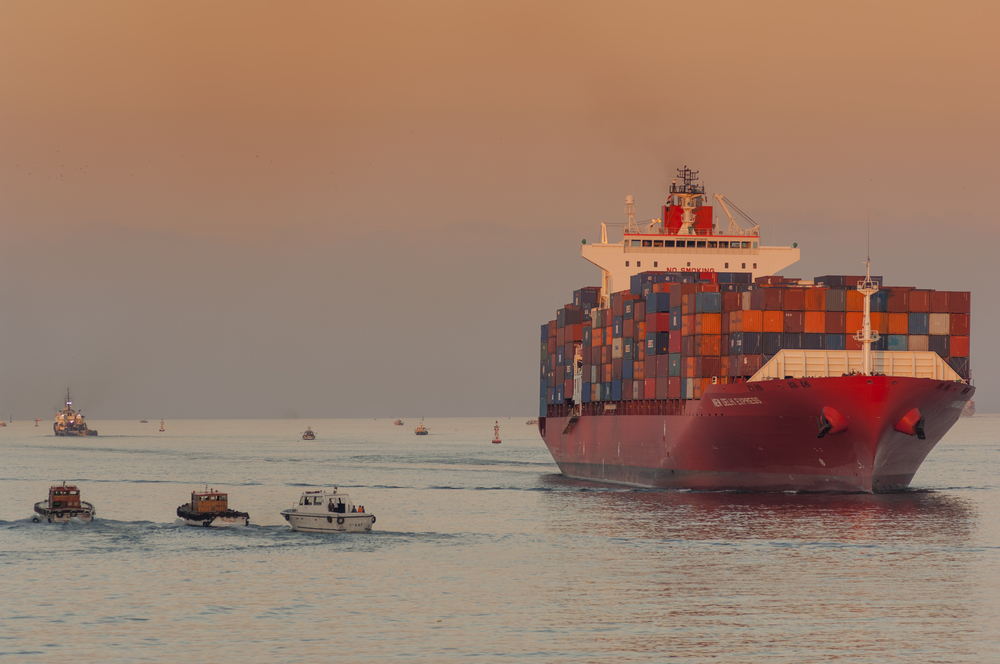 In recent years, the concept of crowdsourcing has become an increasingly common tool used in response to large scale crises and world events. From the BP Gulf of Mexico oil spill in 2010, to the Covid-19 solutions marketplace in Israel last year; crowdsourcing has been proven as an effective way to gather valuable innovative solutions to urgent strategic challenges.

So, in March 2021 when one of the world’s busiest trade routes became firmly blocked by a seemingly immovable container ship, it was another opportunity for crowdsourcing to prove its value. However, as we will see this concept was not effectively utilized and in the end it took a week to move the ship, holding up a staggering $9.6bn of trade per day, and incurring millions in losses for multiple companies.

In this article we will share crowdsourcing best practices from the world of business, where this methodology is being used in an incredibly effective way to generate ROI for leading companies across the globe.

Read on to discover how this concept might benefit you and your company, no matter the how big or small the challenges you face are…

How Was Crowdsourcing Utilized?

Traditionally the party – be it company or individual – who is closest to the challenge or issue is the one to launch the crowdsourcing ‘call for ideas’. This can work in a variety of ways, but in simple terms the individual ‘sources’ ideas from a large ‘crowd’ of individuals, with the hope of discovering an innovative groundbreaking solution that might not have been considered otherwise.

With the Suez Canal Obstruction of 2021, it was naturally the Suez Canal Authority (SCA) that was responsible for resolving the issue. The SCA was initially quick to call in the experts, and even had an offer of help from the US Navy, however, from what we can see it does not look like they made any kind of effort to employ crowdsourcing best practices on a larger scale. In the end the issue was solved not through innovation, but persistence and determination. The ship was eventually dislodged on 29th of March as the result of dredging effort by a company called Boskalis. 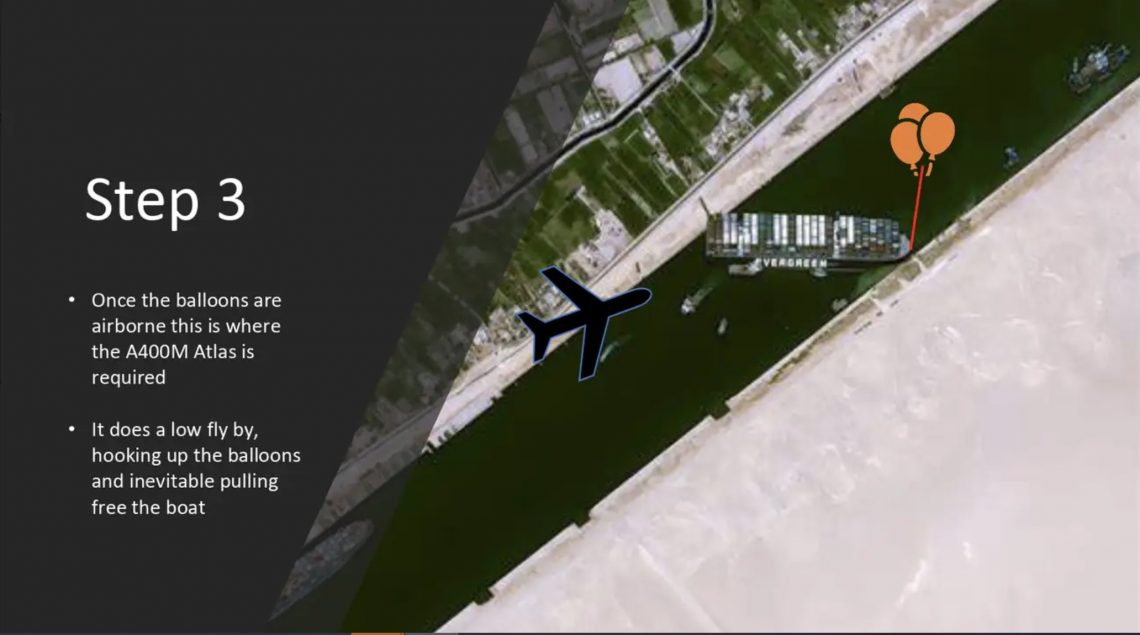 One particularly creative submission made via the Business Insider ‘Call for Ideas’ by a reader named Liam Neane.

What we did see is some third-party crowdsourcing efforts on behalf of the SCA. We can see that on the 26th of March The Guardian published a request for ideas to solve the crisis, and at a similar time so did Businessinsider. Of course, not every idea was serious but many of them were highly technical and well-thought out, however it does not appear that either of them contributed to the eventual outcome.

Obstructions on the Suez Canal are not a new phenomenon. In 2017 it was blocked for a few hours by the OOCL Japan, in 2006 it was blocked by the Okal King Dor for 8 hours, and before that in 2004 the Tropic Brilliance became lodged for 3 whole days. So, when the Ever Given became lodged in 2021, it’s safe to assume that the SCA was confident that they would be able to resolve the issue within a similar time frame. 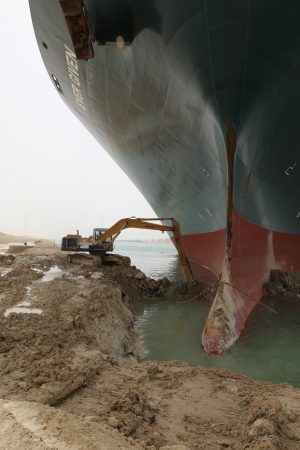 The SCA continued floatation works until the vessel was finally moved on March 29th 2021.

However, as the days went on with little sign of progress, it became increasingly clear that the SCA would not be able to rely on the same methods that they had used in the past to achieve a similar outcome. This is incredibly relevant in the world of business, where many organizations are happy to continue using existing solutions rather than looking for new and better ones.

While the ship might have only been blocked for 6 days in total, this is an entirely unacceptable ‘outage period’ considering the global significance of the Suez Canal as a service. Fortunately for the SCA, they have an absolute monopoly on shipping in the region – the only realistic alternative to using the route is to take the 15,000-mile detour around the horn of Africa. Ultimately, because the SCA has no competition there is very little pressure for them to innovate. This is not a luxury that is afforded to most organizations, so it is critical to be quick to crowdsource – don’t hesitate to ideate!

2. Get Your Ideas to the Correct People

Gathering ideas and adopting crowdsourcing best practices, is a fantastic way of gathering solutions and suggestions, but if these are not seen by the right people (those in the position to take action) then it renders the campaign pointless. With the Suez Canal obstruction, we saw crowdsourcing initiatives launched by third parties, but because these initiatives were not connected it’s very unlikely that any of the ideas reached the relevant individuals.

When crowdsourcing solutions, one of the most intimidating factors of a well-publicized crisis is the sheer quantity of ideas – it can seem impossible to sift through thousands of submissions and find ‘the gold from the gravel’. In the case of the BP oil crisis, they were forced to employ over 100 experts to review the 123,000 submissions that they received. Out of those it was eventually decided that only 30 were viable, however it took a lot of time and effort to get to that point.

Fortunately, large businesses have found a much more efficient way to manage a large number of ideas in the form of idea management software. These platforms – such as Qmarkets – allow businesses to employ artificial intelligence, crowd voting, and data mining to automate the initial process of idea evaluation. If BP or the SCA had utilized this type of platform, it could have allowed them to easily generate a highly reliable list of ideal solutions with a minimal investment of time or resources.

Crowdsourcing Innovation: Changing the world one idea at a time a Ted Talk by Rob Wilmot

3. Gather Ideas for Prevention Rather Than Cure

As cargo ships increase in size, it is becoming more problematic for canals to accommodate them, leaving crucial trade routes vulnerable. In 2006 the Panama Canal underwent an expansion that cost $3.1billion, only for bigger ships to be built that still can’t use the route. While the Suez Canal has only been blocked a handful of times since opening in 1869, 4 of those have occurred within the last 15 years. The Ever Given blockage caused a backlog of 400 ships, disrupting $9billion worth of goods, and costing Egypt an estimated $12-14mil per day. So surely, it’s time to take preventative measures to ensure a crisis of this magnitude does not occur again?

As this unfortunate example shows, companies cannot afford to wait for a crisis to find solutions to problems that they are already aware of. In the world of business, it is best-practice to employ crowdsourcing as part of a continuous improvement process. This provides employees and external stakeholders a way to share their suggestions for improving existing processes. While in this instance the obvious solution might be a single decisive action (for example, simply widening the canal), it is essential to also develop and assess incremental solutions that can accumulate to deliver an ideal outcome.

Crowdsourcing can be an incredibly powerful way to gather ideas and respond to a crisis, whether it is on a departmental, companywide, or global scale. But as we have seen its easy to get crowdsourcing wrong, so it’s critical to have the tools to support the process. A platform that has been built specifically for the purpose of crowdsourcing, is vital to gaining the most out of any crowdsourcing initiative.

Innovation itself has become essential to survival today as the ability to pivot and change is becoming a necessity to an ever-changing business environment. Proactively innovating against potential challenges safeguards your organization in times of crisis and creates an efficient and stable business in the long term.

While it is important to leverage the power of crowdsourcing best practices in business where large sums of money are sometimes on the line, it’s even more critical that this concept is employed more widely in the world at large, where the stakes are often much higher.

To discover how crowdsourcing might be able to help your organization in times of crisis, reach out to us and schedule a call with one of our experts today!