The Pirate Approach to Creativity and Innovation in Leadership: Create Value for Your Enterprise with a Buccaneer Mindset

There’s a reason why “the pirate” has proven to be an enduring romantic figure for centuries now. It’s hard not to regard the swashbuckling, rebellious, go-where-the-wind-takes-you approach to life without some sense of envy, particularly if you’re stuck in an office. However, the good news is that there are a few attributes of the privateer persona that can and should be emulated when it comes to creativity and innovation in leadership (and we should emphasize that this doesn’t involve getting anyone to walk the plank).

When we think of great innovators in history, people like Steve Jobs and Thomas Edison typically spring to mind first. But why not pirates? During the golden age of piracy (1650-1720), notorious buccaneers like Henry Morgan and Blackbeard (of Pirates of the Caribbean fame) had to employ a variety of decidedly innovative strategies to reach their goals and remain several leagues ahead of the competition. What’s more, pirates were ambitious and driven individuals who believed in a vision and did all they could to achieve it. Surely these are the traits that any innovation leader should possess.

The following are just a few of the admirable (and legal) corsair qualities that will foster greater creativity and innovation in leadership, as well as drive real value to your enterprise. Let’s dive in!

Robert Louis Stevenson, the author of Treasure Island, once remarked that “life is not a matter of holding good cards, but of playing a poor hand well.” This approach is just as applicable to an innovation leader trying to lead his company to a treasure trove of value while making optimal use of the resources at hand.

Because grappling with budgetary restrictions, internal bureaucracy, and external competition is inevitable, good innovation leadership means making the best possible use of limited resources under pressure. Just like a pirate, the innovation leader needs to be able to take advantage of every opportunity that comes their way (while also keeping mutinies at bay). This means anticipating opportunities before they arise by constantly being aware of changing consumer demands, emergent innovation trends, and the capabilities of the enterprise.

The pirate is the eternal optimist, never letting the loss of a map, ship, or leg, discourage them from reaching their prize. Maintaining an air of optimism is also crucial for innovation leadership, as it’s essential for envisioning how far new creative endeavours could take the company within a given time frame.

Innovation leaders should be spending their time looking to the horizon (i.e the coming months and even years) in addition to the here and now. Consider the development of the airplane. Although initial development entailed grueling trial and error focusing on short-term goals –  such as overcoming weight and aerodynamic limitations – efforts were motivated by a grand vision in which distance could be conquered by flight. Today, this long-term goal has become an everyday reality. 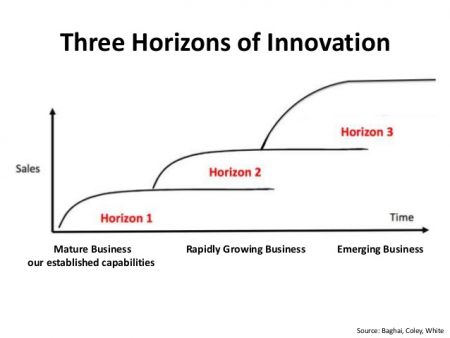 Good innovation leadership means remaining focused on three distinct horizons. These include analyzing the present and what is in the most immediate future and its pragmatic concerns can be addressed with existing capabilities, a future where there is ample visibility to make reasonably accurate innovation forecasts for growth, as well as a more distant horizon where – although there is less predictability – grander visions can be accommodated.

See How You Can Generate
More Creativity and Innovation
in Leadership with
Employee Input:

Should we attack that galleon or not? Should we anchor here or risk the reefs and doldrums for fairer shores? The pirate’s life demanded decisive and often rapid decision making. In the same way, an innovation leader needs to be able to examine any given situation and make tough decisions. This often involves choosing where the budget should be best invested, who or what needs to be cut, and most importantly, what course should be charted for the overall innovation venture to be most successful. Having an efficient means to communicate with other departments and gather key metrics from them, can help produce a clearer picture so that the most impactful decisions can be made.

Of course, decisiveness also means knowing when to cut your losses and move on. The most successful pirates knew that when the odds were stacked against them, there was nothing wrong with quitting while they were still ahead. An innovation leader must be the same way, learning when to hold ‘em and when to fold ‘em. Sticking to your guns is admirable, but only to a point. Facing reality and regrouping or pursuing a new direction is always preferable to going down with a sinking ship. Of course, having a means of actively measuring the KPI of innovative ventures , as well as reporting this information to various departments, can reduce the need to continuously “change tack” when it comes to innovation.

Despite being members of often tightly-managed crews, pirates were known for their fierce independence. After all, it took a lot of courage to shun the conventions of 17th century society and choose buccaneering over a safe but inglorious life. Likewise, it’s important for innovation leaders to embrace a free-thinking spirit, unencumbered by the “can’ts” and “won’ts” so prevalent in enterprise corporations. Truly great innovation leadership will result in employees being encouraged to think outside of the box and inspire them to contribute bold ideas that could yield major returns.

Aside from being a key virtue of a good swashbuckler, independence is also a critical component of disruptive innovation. It’s important to venture into uncharted waters with bold and original ideas if blue ocean markets are to be secured. Although adhering to an established model to maintain sustained incremental innovation affords a degree of security – as well as a variety of other benefits- playing it too safe could result in being blown out of the water by other more independently minded competitors. It’s far better to strike while the iron is hot. 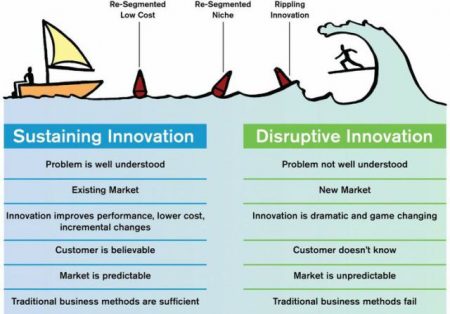 This graphic by Joseph Babaian draws a comparison between the attributes of sustained and disruptive innovation examples. Although the former makes use of established resources and data to make conservative improvements, the latter has the potential to yield game-changing results even though greater risk is involved. An effective innovation leadership strategy will balance and accommodate both approaches.

Harnessing the Swashbuckler Spirit to Master Creativity and Innovation in Leadership

At this point, it’s important for us to emphasize again the point that we’d hope would go without saying. Innovation leaders shouldn’t actually be pirating anything. Instead, they should be embracing the tenacity, resourcefulness, and courage that epitomizes the pirates of legend to uncover and implement lucrative ideas.

Though pillaging and plundering is strictly off limits, there’s nothing wrong with innovators adapting existing ideas and molding them into something new. Afterall, phones and touchscreens were both existing technologies before Steve Jobs put them together to create the iPhone. Likewise, electric and gasoline motors were both in use well before Toyota created the hybrid Prius. Successful examples of innovation in business have emerged from practitioners keeping their focus on the horizon, and carefully discerning how existing ideas can be amalgamated and improved.

So how can you channel your inner pirate to enhance creativity and innovation in leadership? Turning up to the office wearing an eye-patch and calling everyone “matey” won’t cut it. We recommend combining the qualities outlined above with the use of idea management software – your map and compass as it were. Hunches are good, but data-backed insights are even better. An idea management system will allow you to define a clear innovation focus or challenge, gather ideas from your stakeholders, and develop these ideas through collaboration. However, using an idea management platform which can be configured to the unique strategic requirements of your organization – such as Qmarkets’ Q-ideate – helps you to ensure that these ideas are transformed into results. Whichever solution or methodology you choose, it has to be said that the applying the mindset of a pirate will help you to promote smooth sailing towards company growth.

To discover how Qmarkets can help you unlock the treasure trove of innovation potential within your company, don’t hesitate to contact us today. You can also try out the Qmarkets platform yourself by requesting a free demo.

5 Essential Skills for Every Innovation Leader

Improvement vs Innovation: Which Is Better For your Business?

The 7 Seeds of Idea Management Platform Success at Barenbrug Group