Nature has long inspired visionaries to look beyond existing ways of living and thinking. Many notable engineers, architects, designers, and other creators have discovered unique adaptations between a species and its environment, and applied these insights to drive innovation across a huge variety of inventions, products, services, and industries.

Known as biomimicry, or biomimetics, the concept is simple. It recognizes nature as the ultimate problem solver, and as such, entails gaining inspiration from the various structures and systems of biological entities to develop innovative solutions and designs. Renowned American natural sciences writer and innovation consultant Janine Benyus describes biomimicry as “the conscious emulation of life’s genius.” A classic example of this in action can be seen in the recently developed ‘furry’ wetsuit, modelled after the beaver’s rubbery and insulated pelt. 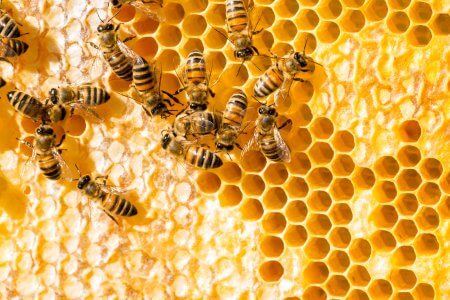 The way that bees gather information from the field and share it with the hive has surprising parallels to the modern office space.

To duplicate the ingenuity and efficiency found in the way nature solves problems, innovation-seeking companies must understand, encourage, and implement similar processes. One way to do this is to create a “beehive” – just as honeybees who discover the locations of flowers come back to the hive to share that valuable information, companies can benefit from a similar hub where employees can share and develop new ideas.

At Qmarkets, this is what we offer to leading companies such as Ford, Nestle, PMI, UniCredit, and Lufthansa in the form of cutting-edge configurable idea management software platforms.

From Evolutionary to Revolutionary: How Nature Inspires Outstanding Innovation

Nature has been developing, testing, and refining its processes and structures for around 3.8 billion years!. “Given the level of investment, it makes sense for us to use it,” says Michael Palwyn, an architect and thought leader specializing in biomimicry. “By applying ideas from ecosystems, you can turn problems into solutions that are better both environmentally and commercially.”

Simply looking at some of the most innovative designs of the last 100 years, we can see how animals and plants have consistently inspired major solutions to the design issues we humans have grappled with.  The real challenge of biomimicry is just knowing where, and how, to look for new inspiration.

Take the aeroplane. The Wright Brothers observed pigeons in flight before they built their prototypes. Upon closer inspection they noticed that the air flowing over the curved surface of the pigeons’ wings created the lift, which helped them succeed in flying the first plane in 1903. Of course, gleaning inspiration from bird wings to design an airplane is an obvious approach – but how about imitating birds to make better trains?

During the 1990s, engineer Eiji Nakatsu was tasked with developing a unique solution to the sonic boom made by the Japanese bullet train whenever it exited a tunnel. His eureka moment came when he observed the way a kingfisher enters the water silently to catch its prey. As such, Nakamura modeled the front of his train design on the shape of the kingfisher’s beak. This enabled silent tunnel exits at faster speeds, reducing noise pollution and improving efficiency at the same time.

Eiji Nakatsu’s bullet train designed was modeled after the Kingfisher’s beak. A classic example of biomimicry in action.

In a similar unexpected fashion, sharks inspired inventors to create bacteria-free surfaces in hospitals, restaurant kitchens, and public restrooms. The way sharks repel microorganisms and keep their skin clean, led to the design of a material called riblets– now widely used in many industries today, including the aerospace and nautical sectors.

With biomimicry, creativity doesn’t require the apple to fall far from the tree. A lot of the solutions are right in front of us when we pay attention. In 1941 George de Mestral returned home from a hunting trip only to realize his dog was covered in burdock burrs. When plucking them off, Mestral became fascinated by the structure and grip-capabilities of the burrs. His fascination later inspired him to invent Velcro (one of the most widely used products today).

As we can see from these examples (and many more), studying the solutions which have been developed by animals and plants can be an extremely effective catalyst for the development of disruptive innovations and inventions.

Want to evolve internal innovation
at your enterprise?

The Ultimate Teacher: Why Biomimicry Matters

The above examples of biomimicry are compelling, and certainly make it clear why luminaries like Leonardo Da Vinci described nature as the “wisest and noblest teacher”. However, the natural next question to ask is how do we get to a state of mind where we can look at a spider’s web and think about how we can engineer stronger fibres? How do we go from theory to application?

The institute of Biomimicry says we need to become “bio-lingual,” arguing that it’s not only important to respect living systems and structures, but it’s also about applying the lessons from them to improve our planet. To do this, we need to learn to overcome functional fixedness and repurpose what we see out in nature to meet our own needs.

Testament to the growing value of biomimicry (and the need to become “bio-lingual”) is the Da Vinci Index. Launched in 2011 by the Fermanian Business & Economic Institute, the index uses advanced methodologies to track and quantify activity in the field of biomimicry in the US. Specifically, the index measures the usage of terms relating to biomimicry or bioinspiration in scientific papers, grants, patents, and other publications.

The estimated market impact of biomimetics is projected to increase steadily across a wide array of industries. In particular, the waste management and chemical manufacturing sectors are predicted to step up the implementation biomimicry methods in attempts to enhance sustainability:

An example of biomimicry being implemented for wastewater management is epitomized by John Todd Ecological Design (JTED). This company harnesses biodiversity to serve as a “living machine” for wastewater treatment and degraded water body remediation.

The Ray C. Anderson Foundation, together with the Biomimicry Institute, fund the Ray of Hope prize, which offers $100,000 to the winners of the Biomimicry Global Design Challenge. Through this project, groups of engineers come together to work in teams and develop solutions to everyday problems. John Lanie, Executive Director of the Ray C. Anderson Foundation says, “I’ve learned that the most remarkable designs and ideas can come from the most unexpected places.”

The bottom line is, if you give the space and infrastructure to a group of engaged individuals and encourage them to be creative, you can create an environment in which innovation can flourish – the same holds for any company competing in any market.

The DNA of Change: How Taking Inspiration from Nature Can Benefit Your Business

We now know that nature has spent billions of years testing, evolving, and refining its processes. In nature, you might call it survival of the fittest. In product design, you might call it trial and error. For innovations to succeed, there must be room for experimentation within the framework of innovation management at your company.

“By applying ideas from ecosystems, you can turn problems into solutions that are better both environmentally and commercially” – Michael Palwyn

Making space for organic innovation means devoting time to not only creating ideas, but also developing them and, crucially, testing them. When a foraging honeybee comes back to the hive with new information, it’s not instantly acted upon by the whole colony. Different groups of foragers go out to test the new source at different times, with different levels of information.

Biomimicry, or a sudden light bulb moment, may provide the spark, but it is up to the management to ensure the proper evaluation and testing of any product or process is carried out. Qmarkets’ collective intelligence products allows companies to discover, develop, and evaluate ideas from across the whole “hive”. The use-cases which can be tackled by this type of platform are far reaching, from continuous improvement, to new product development, to disruptive innovation. Whatever the objective, when inspiration is taken from nature the results can be truly transformative.

To quote Janine Benyus once more “We live in a competent universe, we are a part of a brilliant planet, and we are surrounded by genius”. The answers are around us and within our reach – we just need to think outside of our own ecosystem.

To learn more about how Qmarkets can help you reinvent your business: