When thinking about the challenges of disruptive innovation – one of the most commonly cited examples is Kodak’s failure to capitalize on it’s dominance during the shift from analogue to digital. However, common assessments of why Kodak failed are quite one-dimensional. They fail to touch on the real reason for Kodak’s catastrophic demise.

One common explanation is that due to strategic decisions made by Kodak’s complacent executives, the company failed to move into the digital sphere fast enough to drive success through a disruptive innovation strategy.  What is then usually prescribed as a recipe for other companies finding themselves in Kodak’s shoes is the strategy of ambidexterity: Managing and exploiting the present while, at the same time, exploring and creating the future. 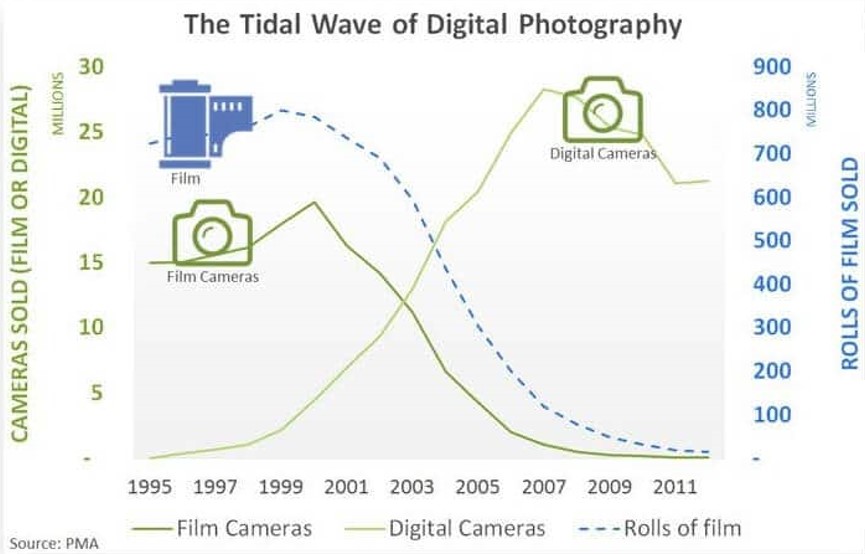 Another explanation usually focuses on the nature of digital technology and how it is interpreted. Kodak invented the digital camera, but the prototype that they built in 1975 was as big as a toaster, took incredibly long to take a picture and had low quality results. But once technology enters the digital sphere, it often jumps on Moore’s law and progresses exponentially. Kodak saw the toaster but missed seeing the exponential curve digital cameras were on.

While I think that aforementioned explanations are entirely relevant Kodak’s business failure case study, they still fall short of explaining the real cause of the company’s demise. Because Kodak did not only take substantial resources to invent the digital camera, in 1996, then CEO, George Fisher, also invested heavily in it: More than $2 billion in R&D for digital imaging. Fisher and his co-executives jumped aggressively on to the digital bandwagon, committing to price points and product specifications, acknowledging the shift towards digital. Kodak even ventured out and acquired a photo-sharing website called Ofoto in 2001 – before Facebook or Instagram were founded.

So, Kodak actually foresaw the disruption and also invested substantial resources in it. The problem, however, is that Kodak saw this new digital disruption using the frame of an analogue photography company. Yes, in a fast-changing and complex world, businesses need to be ready to transform and to seek out new opportunities, but in order to do that, one key capability is needed: Letting go of the past!

Your Frame Dictates How You See the World

John Kimberly and Hamil Bouchikhi from Wharton School show that organisations develop – often unconsciously and just like individuals – a narrative of who they are, reflecting the context of their founding, the belief systems, values and identities of founders and the leadership as well as the strategic decisions made in the past. Clark Gilbert and Joseph Bower from Harvard Business School explain how this narrative can influence strategy. They emphasize that the way in which companies frame disruption or external changes, shapes the strategy they subsequently adopt.

Despite recognizing the shift to digital, Kodak still always framed digital technology as a threat. It saw it as something disrupting its analogue industry, but did not imagine or lacked the imagination to see the full spectrum of opportunities this new technology held.

Kodak actually foresaw the disruption and also invested substantial resources in it. The problem, however, is that Kodak saw this new digital disruption using the frame of an analogue photography company. 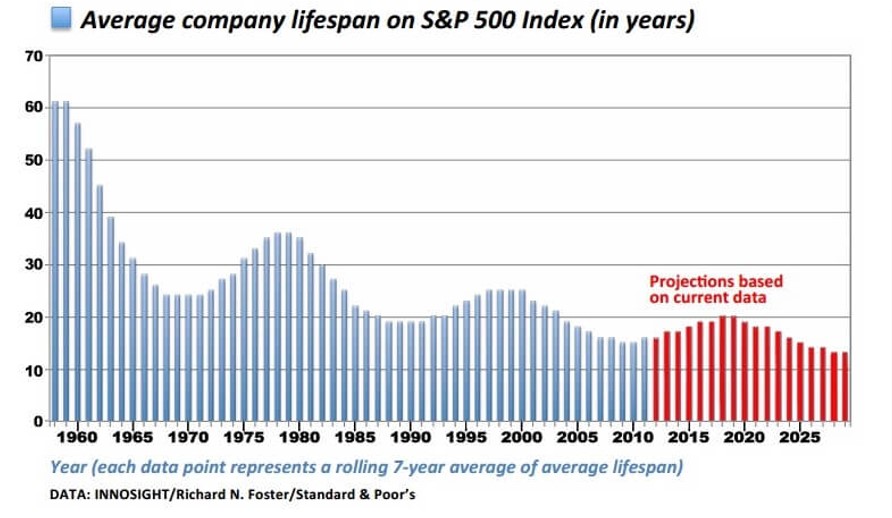 This nonetheless meant that Kodak freed up resources for digital technologies and products as explained above. However, when the motivation for change is caused by feeling threatened, companies usually respond rigidly by focusing on defending the existing business model and by tightening the existing organisation’s authority instead of letting people explore freely and experiment.

This means that they enter this new market created by disruption, trying to defend their old business model or way of thinking about the industry. Because the way a challenge is perceived influences an organisation’s behavior. The irony, however, is that most disruptions, by nature, create a net growth for the economy by starting new markets and attracting new customers.

How Can Firms Forget The Past and Drive Success with a Disruptive Innovation Strategy? Start With These Tools

The future is not only shaped by what you do, but also by what you don’t do. Kodak’s example is just one out of many others (e.g. Blockbuster, Blackberry, Nokia) showing that companies need to constantly confront their past. They need to be able to selectively set aside certain beliefs, assumptions, and practices created in and by the past that form their frame or identity. In fact, the more one confronts the past, the more room there is for creating the future. What follows are three helpful tools organisations can use:

Calculate your total score. If it is 36 or above, your company has a significant “forgetting” challenge to overcome. This means that you want to consider confronting old belief systems before implementing bigger changes that will power success through innovation.

✔ What business are we in today? Or, Why Are We Doing What We Are Doing? Don’t answer the question with technologies, offerings, or categories. Define your purpose or the problem you are solving for people, or simply said: “The job you are doing for them.” Kodak could have framed itself as a moment-sharing company instead of a film and camera or imaging company.
✔ What new opportunities does the disruption open up? As already described above, disruption always grows markets, but it also always transforms business models. Ask yourself this question putting yourself in different shoes: What are the opportunities for the average person, for your partners, your competition, and for firms in other industries?
✔ What capabilities do we need to realize these opportunities? A great irony is that incumbents are best positioned to seize opportunities with disruptive innovation strategy approaches. They have access to markets, technologies, and healthy balance sheets. Think of the systems (structures, processes, relationships) that you need to build in order to seize the opportunities.

All of these tools can help decision-makers to better understand themselves and their organisations before exploring the unknown. It’s sort of a way to refresh your company’s spirit, a way to erase old meeting minutes on the whiteboard, before you start a new strategy meeting.

However, letting go of traditions, old practices and beliefs is one of the most difficult and sensitive challenges. That is why it is important to have many stakeholders involved in the conversation. All of the above methodologies can and should be implemented through a digital collaboration tool, because it is only when a substantial part of the organisation realises the need to let go, that a forgetting of the past can take place. This is where Qmarkets award-winning idea management and crowdsourcing platforms come in, enabling organisations to tackle their pasts together as a collective team.

Contact us to learn more about how Qmarkets can help your enterprise develop a disruptive innovation strategy that will maximize ROI.

1. From the book “The Three-Box Solution” by innovation expert Vijay Govindarajan
2. Developed by Hylke Faber, founder of Constancee and CEO of Growth Leaders Network
3. Influenced by Scott Anthony, managing partner at Innosight

Eliminating Uncertainty: How to Manage Innovation Risk in 3 Easy Steps

The Importance of Casting a Wide Net in Corporate Open Innovation

Successfully Merging Innovation Theory and Practice in your Program