Qmarkets: On the modern business landscape, “Innovation” is an area which is often associated with jargon and  buzzwords. As someone whose ear is constantly to the ground in our ecosystem, which buzzword have you grown to hate the most, and why?

Dan Toma: I feel that buzzwords have a dogmatic nuance to them – so you can say I’m an equal opportunity buzzword hater. On the other hand, I understand why they exist and it’s not as much about the words as it is about their usage. I feel that most of the words make sense but at one point they get misused.

The two worlds I avoid using the most are ambidexterity (in the context of corporate innovation and transformation) and Minimum Viable Product (MVP).

Whenever I mention ambidexterity, most of the people are prompted to think ‘innovator’s dilemma’, ‘search vs. execute’. This association between ‘ambidexterity’ and ‘search vs. execute’ creates the wrong frame for how corporate innovation happens – it makes people think that one part of the organization is standing still while only one is moving. The reality is far from that. Innovation and change happen, or should happen, in every part of the organization. While it’s true that some parts are moving (should be moving) faster than other – ie an innovation lab, the innovation department, etc. – we can’t say that the operational part of a company is standing still or not innovating at all. They are innovating but at a different speed and working on a different type of innovation: incremental.

I don’t want to go really in-depth on the problems of using the MVP buzzword. But I’m gonna say one thing – my definition of MVP: the smallest thing you need to build to learn something. So whenever I hear people say ‘let’s do an MVP’ or ‘what would the MVP look like?’, I do my best to reset the conversation starting from my definition.

Qmarkets: When you need to come up with a big idea or solution, how do you get into the “Ideation Zone”? That is,where do you go and what do you do to get into the right frame of mind for the process?

Dan Toma: I recently watched an interesting TED talk on how to generate new ideas or/and solve problems. They suggested something different: walking. The talk was really well documented and the idea was very well defended with scigientific experiments so I had to give it a try.

It actually works. So whenever I have to come up with a solution I go for a walk. It doesn’t need to be in the park our around the building, a 10 minute stroll though the office yields better results than a 10 minute sit behind a desk – at least for me. I encourage others to try it too. So to your question, it’s not so much about going somewhere as it is about going in general.

Qmarkets: What do you think the biggest barriers are facing enterprises that are in pursuit of innovation?

Dan Toma: Modern corporations are complex organizations. Creating a list of barriers is difficult, as most of them are industry and company specific. With the risk of being accused of oversimplification and generalization, I would say that standardization is one of the biggest barriers. Standardization of processes, KPIs, and even employees’ backgrounds, appeared to be a solution to the need to drive down the cost of a complex system. Cost management is important in any company, independent of size. But listed companies pay particular attention to this area, as it’s an important component of the stock price and, ultimately, an important variable in the shareholder value creation formula.

The environment in which modern corporations operate is extremely complex and volatile. Approaching this with a focus on efficiency is, paradoxically, inefficient. In cybernetics Ashby’s law states that: the complexity of a control system must be equal to, or greater than the complexity of the system it controls. Translating this to organizational design and management, the modern corporation hoping to grow in today’s environment needs to move from a one-size-fits-all mindset, to something more decentralized and flexible. Something that’s able to cope with the changes and diversity of the environment in which it operates.

Qmarkets: What’s the biggest challenge you see for innovation leaders at global enterprises, and what do you think the solution is?

Dan Toma: Simply putting it, and following on from what I said earlier, today’s leaders need to create adaptable companies. The biggest challenge is to move from a ‘monolithic’ organization to an adaptable company, driven by the humbleness that comes from the understanding that the only certainty today is uncertainty.

I personally believe that the competitive advantage of the future is going to be the ability to adapt to changes and the speed at which these ‘course adjustments’ are made. This point is also made in the award-winning book I co-authored, The Corporate Startup.

“the modern corporation hoping to grow in today’s environment needs to move from a one-size-fits-all mindset, to something more decentralized and flexible.”

Qmarkets: If you could turn any one hypothetical invention into a reality, what would it be?

Dan Toma: This might not come as a surprise, but I’d love to see teleportation being created. I know it would change everything in our society if one could work in Hong Kong from 9 to 5 and be home for dinner in London.

Joking aside, cold fusion is something that scientists were able to create in labs. However, we are still far from a commercially viable solution. This one is interesting, as it’s a leap forward from current renewable energy sources to something more reliable – with a potential high impact for our society.

Qmarkets: Where do you think the next big wave of business disruption will come from, and in which sector/industry? What would you advise companies to do in order to “Future-proof” themselves? 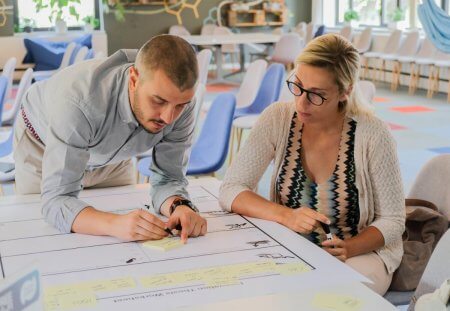 Dan Toma is an acclaimed innovation strategist, product development expert, keynote speaker, and author. He is currently an independent consultant and mentor at major companies like Bayer and Den Norske Bank.

Dan Toma: It’s quite difficult to say where the next big disruption wave will come from, or in which industry. Today’s rate of change is the fastest it ever was and the slowest it will ever be. In general, I look at diminishing barriers of entry, possibilities for end-user benefits from data democratization, and consolidation of legacy players to identify places for possible disruption. All these indicators point to the possibility of new business models emerging in that particular industry – business models usually enabled by a new technology.

Without trying to lecture on the topic, the hotel industry had all of the above characteristics when Airbnb was launched.
I believe that the next industries in line for disruption or massive change will be automotive, energy, banking, insurance, and healthcare. When helping executives in these industries ‘future-proof’ their companies (although I don’t like this word), I try to inspire a culture of continuous and iterative change. This can only be obtained through corporation-wide transformation, backed by training and new capability development.

“The biggest challenge is to move from a ‘monolithic’ organization to an adaptable company, driven by the humbleness that comes from the understanding that the only certainty today is uncertainty.”

Qmarkets: Which innovator throughout history inspires you the most?

Dan Toma: This is a really difficult question, as I don’t believe in the lone genius myth. It minimizes the contributions of the other people that have influenced that particular person’s invention. Yes, in school we learn about Bell inventing the phone. But that wouldn’t have been possible, on one hand, without previous failed iterations of the same concept, and on the other, the theoretical concepts upon which the inventions were based – such as magnetism and electricity.

I’m fascinated by people who are able to connect knowledge from different fields and make them into an entirely new concept. Henri Coanda is a good example, as he has used chemistry, physics, and engineering to come up with the first working jet engine back in 1910 – invention that has changed the word. Another interesting character is Charles Eames – his designs were inspired by so many, seemingly unconnected, fields.

The Corporate Startup: How Established Companies Can Develop Successful Innovation Ecosystems (co-authored by Dan Toma) is available for purchase on Amazon.

To discover how Qmarkets can help you implement flexible and efficient innovation management at your company, don’t hesitate to contact us today. You can also try out the Qmarkets platform yourself by requesting a free demo.

How to Overcome Employee Engagement Barriers With a Continuous Improvement Program

Can Crowdsourcing Help to Break Down the Biggest Obstacle in Market Research?